Posted on May 21, 2014 by OurFourLeggedFamily

With all the craziness around here, sometimes I have to remind myself to slow down and enjoy the little things… like how pretty Isis’s paw is in the sunlight while she naps on my lap.

I’m very, very far behind in my blog posts, but I’m hoping to post an update soon. The good news is, we’re all doing very well.

Posted on April 8, 2014 by OurFourLeggedFamily

One of my friends has recently stepped into the world of fostering, and I’m so proud of her for filling a desperately needed void. A little over a month ago, Brit arrived in Denver as part of a transport via Rez Dawg Rescue. Before I go any further, let me show you how beautiful this young lady is… 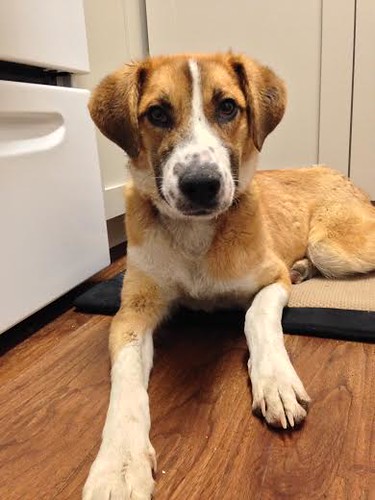 See, she’s a gorgeous strawberry blonde. Who happens to be looking for a family to love and call her own.

Brit has a wonderful personality, super soft fur, and expressive eyes and ears. Even better, she’s adjusting to life in a home faster than expected, mastering potty training in only a week. She’s also making great progress on basic commands like “sit” and her leash manners. Even though Brit came from the streets of New Mexico, she’s very people oriented and is gaining confidence meeting new dogs while out and about. 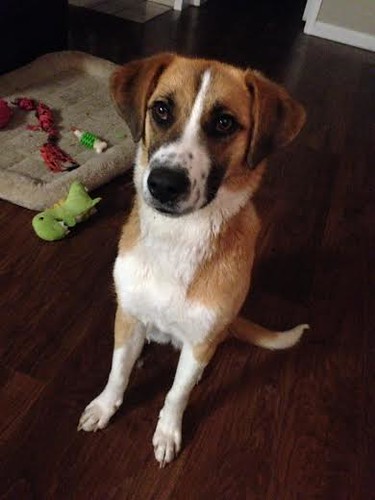 “Sit” is super easy for such a bright pup.

Brit is perfectly sized at roughly 30 pounds, and although she’s gaining some much needed weight, it’s unlikely she’ll ever be a big girl. And with those perfect floppy ears, she’s irresistible!

If you’d like to learn more about Brit, feel free to check out her adoption listing over at AdoptaPet. She’s a gorgeous pup with a wonderful personality, who would love to find her fur-ever home soon.

Have you had your veggies today?

Posted on March 31, 2014 by OurFourLeggedFamily

She cries for spinach every single morning while we pack our lunches for the day, and she’ll go in the fridge when the door opens if she doesn’t think she’s being fed her ‘treat’ fast enough.

Do your pets eat human food?

Posted on March 27, 2014 by OurFourLeggedFamily

So after a month of not posting any updates, I have some exciting news to share. In June, I’ll be moving from Denver to DC for a one-year position (which will hopefully be extended once I’m done)!

Part of the reason I’ve been delaying posting any updates on this move is because there have been so many aspects to sort out. The first one is the biggest… our family will be living apart through this upcoming holiday season. I’ll go ahead to DC and the rest of the “herd” will stay behind in Denver while the hubby finishes up a project at work.

There are still a lot of details for us to sort out, like specifics of the move itself, but the good news is that we have the actual housing part sorted out. The cautious part of that news is that it will involve Diggs and Isis moving in with another cat and dog for several months. Now, we know that Diggs likes the dog, Xena, and gets along fine with the cat, Cat. Actually, Cat is pretty good at making his opinion known with Diggs and has the weight to prove a point if he needs to.

Not one of my best pictures, but at least you can see both pups together!

However, Isis may present a challenge. It’s been a long time since I’ve tried to introduce two cats to one another, but I’m hoping it will go as smoothly as possible. There are lots of things I hope will help, like using our Feliway and keeping them separated for an extended period of time until they get used to one another. Cat has had another cat move in and out of his home and did pretty well, but that cat was much older and pretty much stayed to himself. So it’s hard to say at this point what the first round of introductions will look like. I know moving is never easy, but I do feel better that Isis will have Diggs and her dad around to help make her more comfortable.

Other topics we’ll have to tackle at some point is the actual transportation of the animals. When we adopted Diggs we were warned about his tendency to get carsick, which our experiences confirmed rather quickly. He does ok with our short trips to daycare, training and the vet, but I don’t know how he’ll do on a longer drive. Hopefully the overall improvements we’ve seen in his digestion will help the car sickness for the trip. Right?

These pictures were taken while the car was stopped, I promise.

We will definitely have to work on getting him to lay down while he rides instead of standing/sitting the entire time, although he’s pretty good at sitting if he’s asked to. Additionally, I suppose I now have my final motivation to get him a safety harness for the car. Has anyone tried the Ruff Rider line of harnesses? Since my car really isn’t dog friendly, like an SUV or hatchback, and has leather seats, I’m always worried about him sliding around and bumping into the seats when I stop. And he never gets to ride in the front seat anymore because of my concerns with the air bags. So driving across country should be interesting, to say the least.

Have you had to be away from your pets for an extended period of time? Or have you tackled big moves with the pets?

Posted on February 26, 2014 by OurFourLeggedFamily

His stride is a little different in the boots, but I think he moves pretty well on the concrete. It’s definitely more natural in the snow covered grass.

Posted on February 19, 2014 by OurFourLeggedFamily

I wish I could say the day-to-day aspects of our lives were easy, but that would be a half truth. Some parts of it are very easy (or have gotten easier), like Diggs’ willingness to eat his breakfast and dinner. A year ago, I would spend ~30 minutes trying to coax him into eating at each meal, sometimes bribing him with beef or chicken stock. Now, he runs towards his bowl when I mention “kibbles”, and we’ve had to find creative ways to slow down his actual eating. It’s a complete 180!

Other parts we still struggle with, like inappropriate chewing. The latest victim, the corner of my box of very expensive contact lenses. In the short time of my shower, Isis managed to knock the box off the counter and Diggs decided they looked tasty. Luckily, he only got the cardboard and didn’t manage to damage the packages inside, but that’s only because my hot water heater is smaller than I’d like it to be. Now, let’s be honest, they weren’t intentionally working together to be destructive, but the timing is pretty convenient, don’t you think? 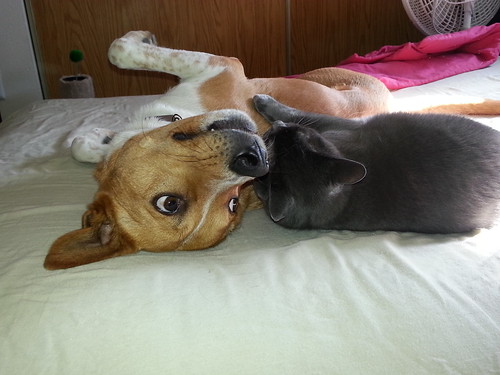 Sometimes it does seem like they’re getting awfully cozy, doesn’t it? I wonder what they talk about when they’re not wrestling with each other.

Logically, I know that half of our training battles would be resolved if I helped create a more ideal situation for Diggs. He wouldn’t be able to chew tissues from the waste basket if it wasn’t at face level or had a lid on it, but that’s not the style of trashcan we have. Getting a different style would be easy, easier than some of the other changes we’ve made, but it’s just one I haven’t taken care of yet. He and Isis wouldn’t have colluded to destroy my contacts if the box had been put away instead of left on the counter. This is my last semester of classes in graduate school, and my schedule is more than full attempting to wrap everything up. That doesn’t leave a lot of time for other things, so I’ve had to work hard to carve out time for important things, like training Diggs. I know he needs to be challenged, mentally and physically, and I know it improves our bond together. So sometimes I struggle with housekeeping, but it’s worth it to see the progress Diggs is making in other areas.

What are you struggling with lately? Have you had any successes, big or small?

Posted on January 29, 2014 by OurFourLeggedFamily

Proof that Diggs likes other cats besides Isis. This was his first time meeting Fi at a friend’s house. Isn’t he behaving like a gentleman?

ventures into fosterhood and how we learned to love crate training

Two Pitties in the City

Fun, Fur, and Family in Denver

Adventures in raising a crazy dog

Our Four Legged Family
Create a free website or blog at WordPress.com.